The following is not originally from me, but my notes from reading Network Science (Ch. 4.1-4.2) by Albert-László Barabási. Notes are accompanied by my explanations.

The data I used is called “Internet” from http://www-personal.umich.edu/~mejn/netdata/. I’ll use R to plot it. See the result in Figure 5.4 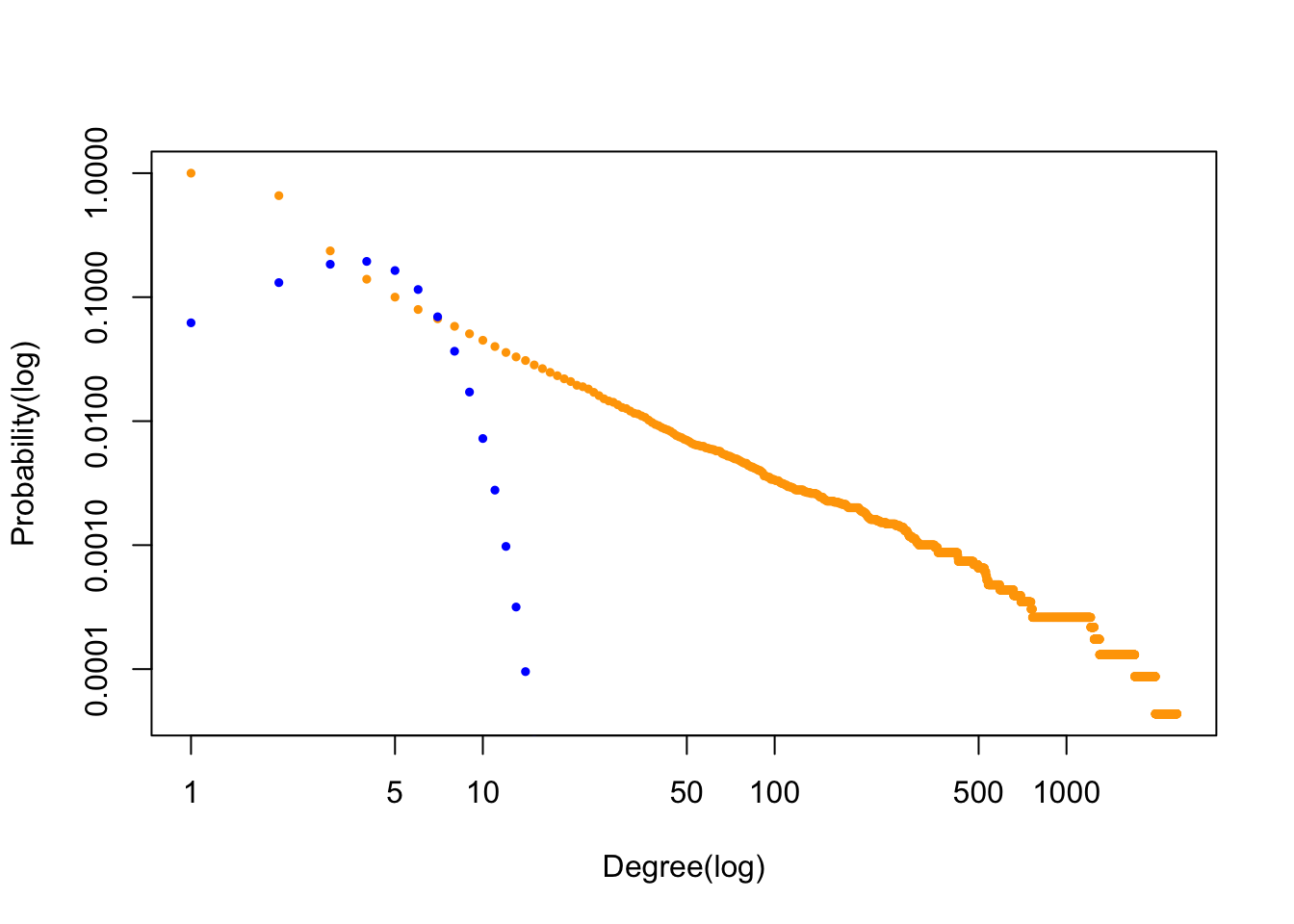 We can see that the degree distribution of the real network is different from Poisson distribution but rather roughly follows a power law. We call networks like this as scale-free networks.

A quick note: in the above codes, y2 <- dpois(x, lambda = mean(deg_internet)) ensures that both networks share the same \(\langle k \rangle\). Therefore, the result in the figure tells us that the degree distribution of this real network cannot be approximated by Poisson distribution.

The following is not originally from me, but my notes from reading Network Science (Ch. 4.3 - 4.7) by Albert-László Barabási. Notes may be accompanied by my explanation.

Hubs are nodes with high degrees. To understand that there are more hubs in scale-free networks than in random networks, we can refer to Figure 5.4. The two distributions have exactly the same average degree, \(4.22\).

We will find that compared to random networks, scale-free networks have more low-degree nodes and high-degree nodes, but fewer nodes with degrees near the average degree. This tells us that in random networks, most nodes have comparable degrees (around the average degree of the network) whereas in scale-free networks, there are so many nodes with extremely low and extremely high degrees.

Read the section of The Largest Hub in Chapter 4.3 for formula derivation. I am currently not capable of doing it.

Both World Wide Web (WWW) and the Internet are networks. WWW is a network of information. Its nodes are documents and its links are URLs. In contrast, the Internet is a network of infrastructure. Its nodes are computers and its links are cables and wireless connections. Although they are different, their degree distribution can be both approximated with a power law, meaning that there are a large amount of high degree nodes (“hubs”) and low degree nodes. In other words, both reveal scale-free properties.

As ubiquitous as it is, the scale-free property isn’t for every networks. Many networks do not share this property, for example, power grid and material networks. Scale-freeness requires that the number of links a node can have is arbitrary, and not systematically constrained. If this requirement is not fulfilled, then hubs are restricted and the network won’t show a scale-free property.

5.2.3 Ultra-small property, and the role of degree exponent

Small-world property is the only characteristic in real networks that is well explained by random network models, more specifically, by the Watts-Strogatz model.

I still need to work on these two sections. For now, I will just skip them.
Barabási Ch: 4.3-4.7 Reading Quiz needs to be done again!